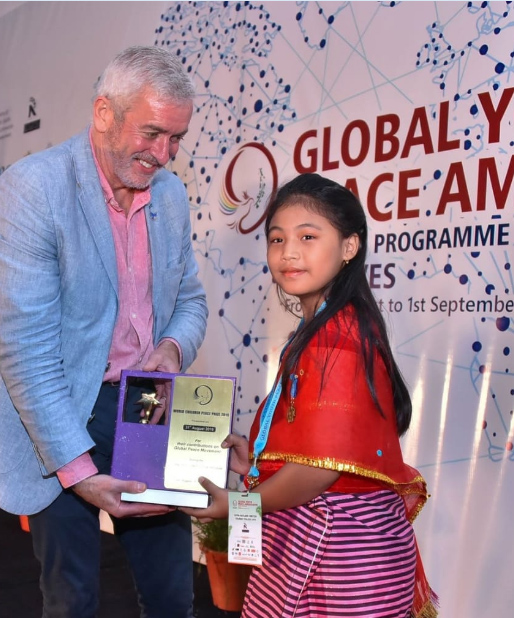 She also participated at the following UN major events:

Submission of Memorandum to the United Nations’ Secretary General

In December 2019, Licypriya met the United Nations Secretary General Mr Antonio Guterres and submitted 4 pages memorandum on behalf of the world’s children to create a safe future for them.

Licypriya donated her savings of Rupees 1,00,000 to the Chief Minister of Kerala Pinarayi Vijayan on 24 August 2018 to help the flood victim children of Kerala Massive Flood. Two years later she received the acknowledgement letter from the Kerala Government. Licypriya’s donation to the Chief Minister supported their work in protecting children hit by the flood. She felt her small contribution would help make a difference to the children during the tough time.

On 15th October 2020, Licypriya spent a night protesting alone in front of the President House near Vijay Chowk to find a permanent solution on Delhi air pollution crisis. She was briefly detained by Delhi Police on 18th October 2020 and later released at Jantar Mantar.

On 28th October 2020, President of India Ram Nath Kovind approved to enact a new law to fight the air pollution crisis in Delhi and signed an ordinance with a Gazette Notification on the same day after a petition filed by one of his climate activist friend Aaditya Dubey in the Supreme Court of India. This is one of her long pending demands to the government fighting for the last over three years. As per the new law, the polluters will be fine with ₹1 Crores (INR) or 5 years jail term. A permanent body as a commission on air pollution has been established  as per the order of the President of India in 5 states viz., Rajasthan, Punjab, Haryana, Delhi and Uttar Pradesh with its headquarter in Delhi to curb the Delhi air pollution crisis permanently.

In 2020, Licypriya published a letter to the participants at the World Economic Forum with activists Greta Thunberg, Luisa Neubauer, Isabelle Axelsson, and Loukina Tille, calling on companies, banks and governments to immediately stop subsidizing fossil fuels. In an opinion piece given to The Guardian they said, “We don’t want these things done by 2050, 2030 or even 2021, we want this done now – as in right now. We call upon the world’s leaders to stop investing in the fossil fuel economy that is at the very heart of this planetary crisis. Instead, they should invest their money in existing sustainable technologies, research and in restoring nature. Short-term profit should not trump long-term stability of life.”

Licypriya Kangujam and 19 other females Friday for Future climate activists from the Global South released an open letter to the G20 leaders ahead of the G20 Finance Minister Summit 2020 on July 17 telling “We won’t let your money destroy our future”. In their statement, they said we are witnessing firsthand the multiple effects of COVID-19, climate impacts and an economic crisis: millions of people, and disproportionately black people, indigenous peoples and people of colour, have been left sick, jobless, displaced and homeless with worsening inequality, and broken health systems.

“She Inspire Us” honour of PM Modi

Licypriya rejected the “She Inspire Us” honour of PM Modi for not listening to her voice. This sparked a huge debate amongst the Indian Politicians and people on climate change in India.

On 2nd October 2019, Licypriya led a march popularly known as “The Great October March 2019” from India gate to Parliament House to urge Indian leaders to take urgent climate action to save their future where hundreds of young people took part on the march. This demonstration took place in many parts of India showing solidarity to her.

Another big impact Licypriya created is the plea in her social media to the people to plant trees instead of just giving her wishes on her birthday. On 2nd October 2020, thousands of school children and people from across India and the World turned out and responded to her call by planting over 2,40,000 trees as a birthday gift to her. Now, school children are going to continue this effect every year.

“Monday for Mother Nature” is a new green movement by planting trees every week on every Monday as a part of taking climate action by school children to make our planet green again. Licypriya target to plant minimum one million trees every year by this initiative. She planted over 300,000 trees under this initiative till today at the age of 10 years which is equivalent to planting 82 trees every day since her birth.

Now, thousands of school children are taking part in climate action campaign and program such as planting trees, cleaning plastics from streets, parks, oceans, rivers and seas, stop using single used plastics at home and inspire millions of other people around the World with her little voice.

Licypriya name was included in the list of Forbes 30 under 30 India in Special mention category for her fight against climate change.

When healthcare professionals and other civic workers in India are facing a massive shortage of protective equipment amid the spread of COVID-19, to increase the supply of protective equipment, Licypriya Kangujam, an 8-year-old climate activist from Manipur has designed a prototype of ‘safety face shields’ for our doctors at home. According to her tweet, the prototype designed by her costs just ₹35. Those available in the market cost more than ₹1,000. She was inspired by a friend in Mexico, who is developing similar kinds of equipment. She has named the equipment as Liface Protective Gear. She was also involved in feeding stray animals during the nationwide lockdown. She also broke down her piggy bank and donated the whole money to the Manipur Chief Minister COVID19 Relief Fund. She also planted trees saplings during the lockdown.

During the COVID19 second wave in India in May 2021, Licypriya raised the funds of nearly 10 million Indian Rupees (₹1Crores) within 3 weeks through her social media to help the marginalized poor people by providing free oxygen concentrator and oxygen cylinder when the Government and the leaders turned blind eyes to provide oxygen for the hundreds of critical Covid19 patients across the country.  She saved hundreds of lives under this campaign called “India Needs Oxygen Mission” and thousands of people from around the world supported it. Government banned her humanitarian relief works in her birth state Manipur by alleging scam on it to discredit her works and to tarnish her image.

Licypriya is preparing for a journey of over 11,000 miles from India to the U.K. via electric car to increase awareness against the fossil-fuel-based economy. “This will be one of my biggest missions in life as part of my Child Movement to fight the global climate crisis,” Licypriya Kangujam told Anadolu Agency on her trip which she plans to launch on Sept. 13, 2020, ahead of international COP26 climate talks in Glasgow, Scotland.

On March 5, she announced the journey to cross 18 countries in 90 days, requesting help and support for the journey from environmental groups. Accompanied by her mother and two others during the trip, she said she would decide the exact route to take in August, taking into consideration the global coronavirus pandemic. Underlining that the consumption of hydrocarbons was driving global warming to dangerous levels, she said the fossil fuels industry was also responsible for a significant part of water and air pollution — a burden mostly borne by low-income communities.

“I’m trying to send a strong message to the whole world on this account ahead of the United Nations Climate Conference 2020 [COP26] to be held in Glasgow, U.K.,” she said. Licypriya said that many travelers around the world had responded positively to her call for support, including Dutch fellow traveler and environmental activist Wiebe Wakker.

“After my official announcement, I received guidance and support from many world travelers to make my mission successful. Some of them are Mr. Marek Kaminski from Power4Change from Poland, world record holder Mr. Wiebe Wakker from Plug Me In,” said Licypriya.

Many people also extended their help in the form of local hospitality, she said, adding: “I think this mission will be a great successful one.”